One million deer in Victoria! 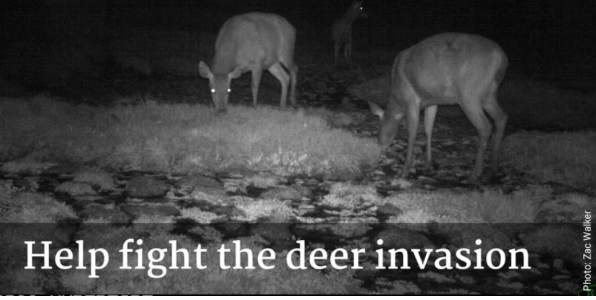 In a recent article, the Victorian National Parks Association has this to say about the deer population explosion in Victoria:

Deer have become Victoria’s cane toads. With a population of around 1 million deer in the state, and probably growing by 400,000 a year, they are now poised to take over the nation.

Six species of deer are already seriously trashing our national parks and conservation reserves such as the Grampians, Alpine, Mount Buffalo, Mitchell River and Croajingolong national parks, as well as rainforest valleys and other threatened ecosystems throughout the state. They’re invading farms and front gardens, and a clear danger on our roads.

FOBIF has previously commented on the deer population in our region.

The Victorian Government has developed a Draft Deer Management Strategy  As the VNPA has pointed out, this Strategy has been heavily influenced by a deer hunting fraternity keen to protect deer populations as a recreational resource. They are encouraging people to respond to the Strategy:

The government, and our land management agencies, aren’t responding with the urgency this situation requires.

They may not act strongly enough if they don’t hear from you by next Monday 29 October.

You can help by filling in a few boxes in the online survey on the draft strategy website (it will only take a few minutes): engage.vic.gov.au/draft-victorian-deer-management-strategy

You can download the VNPA’s Deer Issues Paper here. FOBIF will be responding to the Strategy and we encourage others to do so by Monday 29 October.