Sections of the sandstone wall in Mostyn Street, opposite the Anglican Church

On our second FOBIF walk for the year on Easter Sunday local geologist, Clive Willman, led a group of 16 through Castlemaine streets and up to the Burke and Wills monument. Along the way he discussed the type and source of rocks that were used in historic buildings such as the 1857 Telegraph Station and 1873-4 Post Office in Barker Street, and the 1860s Lock-up in Hargreaves Street. The walk finished with a terrific geological slide show at the Midland Hotel.

Clive brought along an array of photographs and drawings to help explain geological history of the area. 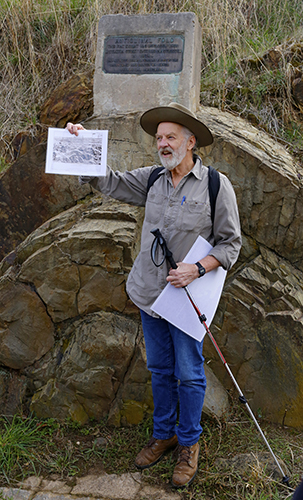 Clive in front of the anticlinal fold in Lyttleton Street holding an historical photo of the site that shows its unchanged form. 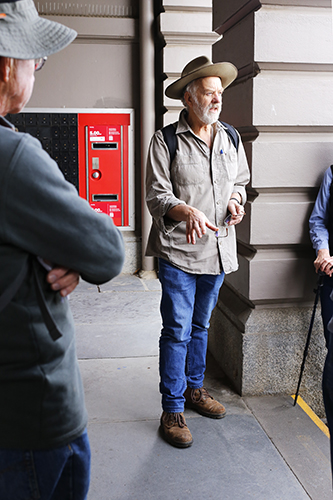 Clive explained that the basalt used for the Post Office steps was easily cut and the slate he is standing on would have come from the Harcourt area. 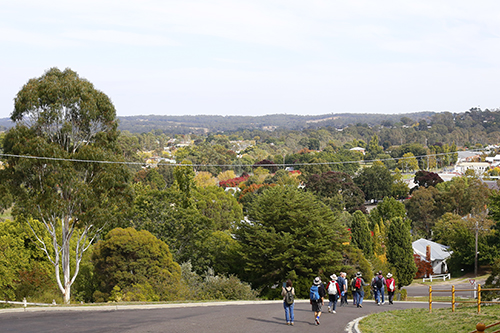 Walkers enjoying the view just below the Burke and Wills monument.

Thank you Clive for leading this informative and enjoyable geology tour. Our next fobif walk is on 21 May to Mount Alexander.