A budding group of springtime learners

A group with representatives from six families heard Ern Perkins give an introduction to one of his favourite places to visit and study in Castlemaine at Kaweka Reserve on Sunday 28th September.

The group of parents and small children, aged 2-6, were then on task with the Local Flora Guide to see which species they could spot and were given instruction on how to use a hand lens by local co-author of Mosses of Dry Forests in South Eastern Australia, Cassia Read. 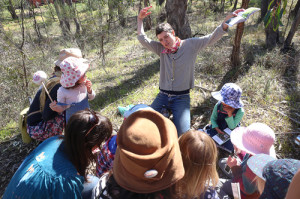 Cassia demonstrating how moss wakes up.

Cassia also introduced the children to the pleasure of using their stomachs as agents for biological control by eating their way through the Briza maxima and illustrated response to changes in weather conditions as she ‘woke up’ some moss with a pour from her drink bottle.

A well earned cuppa and snack break half way through energised the group for the second half of the walk with parents able to socialise and make acquaintance with other likeminded families while the kids played in the pretty spring bush.

Thanks to Ern and Cassia for their help in introducing the group to this patch of bush in an increasingly urban Castlemaine. 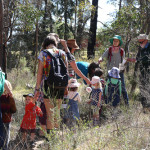 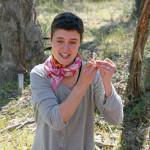 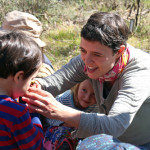 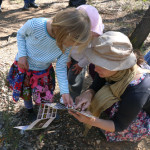