A walk in Kalimna Park 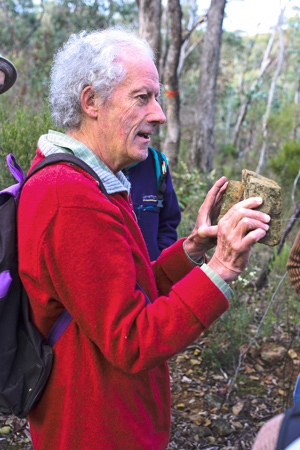 FOBIF’s June walk to Kalimna Park was led by retired geologist Julian Hollis. There were twenty walkers. Luckily the rain held off and the morning was good for brisk walking.

This was the second of Julian’s walks with the group to Kalimna and this time he concentrated on the northern end of the park ending up in the Karrook Bushland Reserve. This reserve was purchased by public donation and added to the Park over 10 years ago.

Julian pointed out numerous geological features and evidence of mining along the way. Two points of interest towards the end of the walk were an aqueduct and several quarries.

Being June there were few plants in flower. However there was plenty of moss, lichen and fungi, some flowering Downy Grevillea (Grevillea alpina) and many low sprouting leaves of Greenhood orchids. A selection of photos taken by Dominique Lavie can be found here on Facebook.

Thanks to Julian for leading another informative and authoritative walk in our local area. Our next walk will be led by Bernard Slattery and take place in the Muckleford South area.