Fifteen people came on the 12 km April walk to Poverty Gully and Eureka Reef. The weather was perfect for walking with the sun shining and a light breeze. We followed the water races for most of the time weaving through the forest.

Marion Letcher was our leader. She has a keen interest in the local history and geography of the Castlemaine Diggings which she shared with the group as we came across many sites of interest.

The group heard about Joseph Brady who in 1865 was the architect of the Coliban Water Supply Scheme to bring water to Castlemaine and Bendigo via a series of channels and aqueducts, some of which we saw along the way.

We stopped for lunch near the Eureka Reef where we took time to take in the amount of excavation and hard work the miners must have done here. 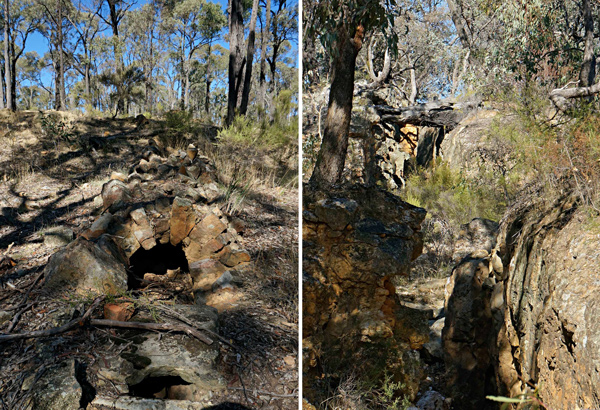 We were all enthralled with the Cornish Chimney built to extract the smoke from the kilns. These ran for about 100 metres parallel to the ground rising along the slope of the hill with the opening of the chimney on the top of the hill.  We learnt that this was the most efficient and cost effective way for the miners to build a chimney, rather than a structure rising straight up from the ground as most chimneys do.

The group also came across the cyanide vats used in the process of extracting the gold from the quartz. We could see the large print “POISON” written on the side of the vat.

Towards the end of the walk Marion pointed out a aboriginal water well which would have been used by aborigines as they passed through the area.

With the information Marion gave us were able to picture how the area must have looked in the 1850’s and 60’s, denuded of trees, camp sites and people everywhere, and the air filled with smoke from the fires.

Our walk finished back near the secondary college at 2.15pm.  The day was enjoyed by everyone. Thanks to Marian for leading this walk which was her first for FOBIF. 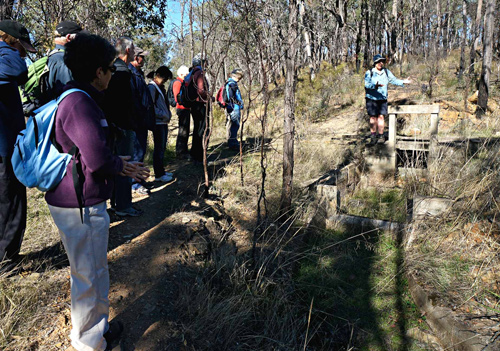