Forget about that dream cruise on the Rhine, past turreted castles built by German madmen. What about a trip from Lake Weroona in Bendigo down to the sea at Portland, on a first class steamer along a noble canal? 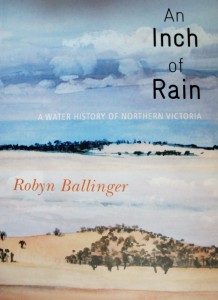 Such an idea was seriously proposed by the Grand Victorian North-Western Canal Company in the second half of the nineteenth century. The scheme had enthusiastic support from some quarters, but didn’t survive an examination of the realities of water supply. It’s only one of many mentioned in Robyn Ballinger’s An inch of water, a water history of Northern Victoria [ASP 2012].

Wacko schemes are one thing: but apparently more reasonable schemes to tame the country, and make it do things it can’t do, are even more threatening. Ballinger offers serious evidence of the human suffering and ecological damage wrought by efforts to green the semi-arid country. With efforts to rectify the longstanding problems of the Murray Darling Basin still ongoing, her book is a sober warning of what can happen when you push the land beyond its capacity: ‘The results have been an increased ecological and economic vulnerability.’

Her conclusion: ‘Historic reactions to climatic fluctuations have been informed, understandably, by the urgency of the here and now. But by attempting  to make the environment more certain in times of political, economic and climatic uncertainty, various schemes linked to science, technology and global markets have actually increased unpredictability…Successive governments have raised cultural expectations and neglected local memory and experience…There is a need to create a vision for Australian landscapes that builds both human and ecological resilience to a changing climate.’

An inch of rain can be found at Stoneman’s bookroom Castlemaine and other good booksellers.