On the subject of the hectare target, Mr Comrie appears to accept the Government’s view that all is going well in the development of an informed approach to fuel management: but most of what he cites as evidence for this is talk, not action:

‘The BRCIM notes that in May 2013, the Minister for Environment and Climate Change stated in the Public Accounts and Estimates Committee:

“We are also doing a lot of work around developing a risk based strategic approach to fuel management on public land. We want to have a program that is based on the risk to human life and critical assets. We want to have an approach that helps us make evidenced-based decisions around bushfire management and also allows us to assess the work we have done and make sure that we have the policy objective of reducing the risk of bushfires while having an eye on property and critical infrastructure and certainly on ecosystems.” p 63 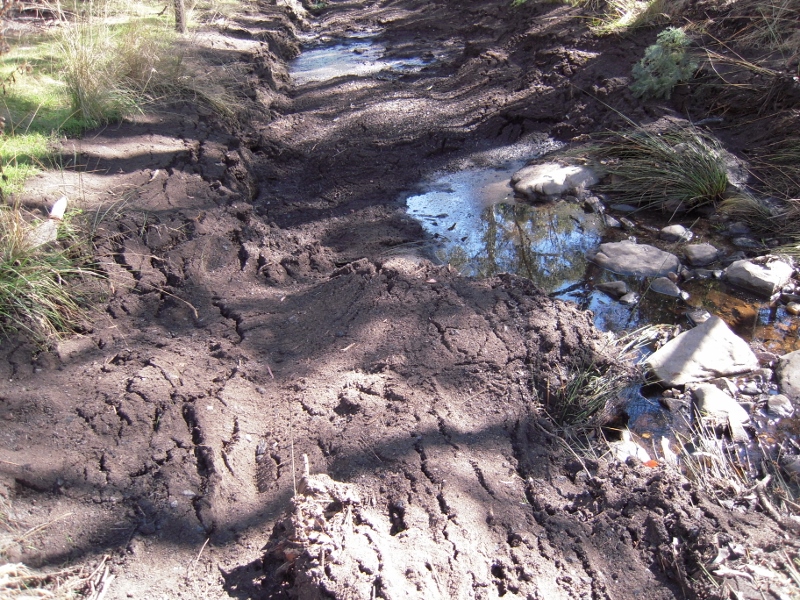 Sludge in the Tarilta Creek after an 'ecological burn', March 2012. 'We want to have an eye on critical infrastructure, and certainly ecosystems.' The question is: why should 'having an eye on ecosystems' have to wait for the development of a flash new system?

‘The BCRIM has been advised that the State has recently adopted a broad accounting framework for planned burning and fuel management on public land as part of the strategic risk based approach described above by the Minister. The BRCIM strongly supports this more holistic approach to managing and reporting bushfire fuel reduction on public land. In the accounting framework, planned burning will be acknowledged as one (albeit the most substantial) of a range of fuel management treatments. Others will include slashing, mulching, mowing, spraying, grazing and under certain specific circumstances, bushfire which as mentioned above has traditionally been excluded from planned burning targets.

In other words, the Monitor accepts that the State is moving towards a more strategic approach to fuel management than the current mindless pursuit of targets.

Some of what he says is in fact encouraging. The problem is that all of the above praiseworthy ideas are in the category of things that will happen one day: DEPI ‘is developing criteria’; the accounting framework ‘will be a critical tool’…The Monitor accepts that all these measures are ‘part of a process for transitioning from a purely area based target approach.’ In the meantime, the burning goes on: and, as we were told in Bendigo, it’s not going to slow up any time soon.