Doug Ralph has supplied us with the text below, as evidence of 19th century attitudes to forest use. The report is from the Argus newspaper, and can be found on the National Library’s Trove website:

“The following report of the inspector of state forests for the year 1870, was presented to Parliament last night by the Chief Secretary :

Sir,-I have the honour of transmitting to you my report on the state forests for the year 1870.

During this year my attention has been chiefly directed to the preservation of the indigenous timber in the several state forests situate at Mount Macedon, Bullarook, Haddon and Windermere, Fryers and Elphinstone, and Mount Alexander, the several timber reserves immediately around Castlemaine, and the extensive redgum forests at Barmah, and Yellima on the Murray River. 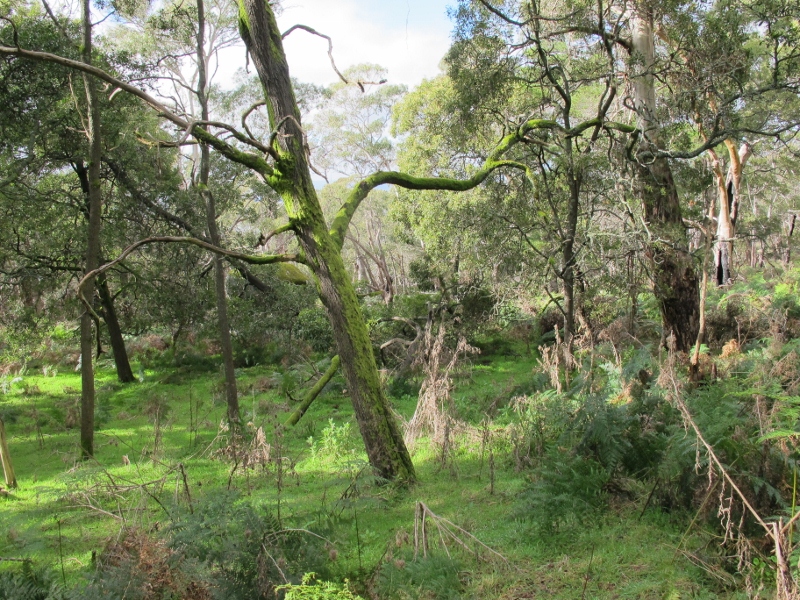 Mount Alexander 2012: by 1870 the Mount had been ‘completely denuded’ of useful timber, as had the forests between Taradale and Castlemaine.

For some years past the forests in the vicinity of the various goldfields have suffered severely from the wanton devastation and reckless manner in which timber for mining purposes has been obtained ; but now that certain areas are reserved for state forests and timber reserves, and a more rigid supervision is carried out by Crown lands bailiffs generally, I have every reason to believe that the young indigenous timber trees fast growing up around the principal goldfields, will, in a very few years, supply all the requirements for mining purposes.

It is, therefore, of the utmost importance that steps should be taken to protect and foster the growth of indigenous trees near the goldfields, and where necessary replant non indigenous trees, in order that ,a constant supply of timber for pit props and other purposes may be readily obtained.

I would also beg to recommend that, from time to time, additional areas of land, not required for actual settlement, should be reserved, in order that the existing timber may be protected by special regulations. The quantity of timber used in mining operations on the goldfields is very great, and the difficulty of obtaining it in some of the most important districts is felt to be increasing to an alarming degree.

Large areas of the state forests reserves at Macedon and Bullarook are already denuded of their timber, and as these localities possess climate and soils peculiarly favourable for the growth of non-indigenous trees, and occupy positions easy of access from the principal mining districts, I considor it to be of urgent importance that immediate steps be taken to establish small nurseries in each of these localities, for the propagation and rearing of such trees as are found suitable for forest culture. Such nurseries need not be of much extent, and the cost of clearing and labour required in their management would require but a very trifling expenditure.

I would also beg to recommend that the site originally selected and reserved for this purpose on the southern slope of Mount Macedon, be employed, the soil being admirably suited for the growth of European trees, being well sheltered from parching winds, and having a plentiful supply of permanent springs, and its proximity to a railway station makes it the most desirable situation in the district.

From observations made during repeated inspections of the Macedon forests, I have to report that unless some more stringent regulations are adopted for the preservation of the timber remaining, it is only a question of time when the whole of this mountain range will be entirely denuded of trees. As a proof that the forest is almost destroyed, many of the saw- mill owners are now cutting timber at a dis- tance of from three to five miles from their mills. The great portion of this destruction has been done by rival saw-mill owners and splitters, in their hurry to secure some coveted patch. Owing to this reckless system, much fine timber has been cut down and left unused, only to add fuel to the great conflagrations that occur so frequently in this forest, and which destroy all the young timber in their course. The regulations under the Land Act 1869, section 53, and its conditions, will prove a great protection to the state forests generally and where vigilantly car- ried out, prevent much waste of timber, the waste of which had almost become a national calamity.

I have also to report that the greatest portion of the state forests and timber reserves situated between Taradale, Elphinstone, and Fryers, have been completely denuded of all their useful timber, only a small supply being left for firewood and mining purposes. I had the honour to report to the late Commissioner of Lands on this destruction, who caused a very strict supervision to be had over woodcutters and splitters in this forest, and I have now to report that immense numbers of young trees have grown up during this year ; and I have no doubt these reserves will soon furnish sufficient timber to meet all the requirements of this district, and furnish a continuous supply for future generations. The indigenous timber on the low ranges immediately south of Castlemaine and Chewton, has long since been destroyed; yet, during the last two years sufficient young trees have grown rapidly, which, if properly conserved and protected from animals, will in a very few years become useful timber.

Immediately north of Castlemaine, some good examples of renewed forests may be seen where the land has been alienated, and the young timber preserved, and in much of the country between Castlemaine and Maldon, where the timber reserves have been protected, and only the mature trees cut down, healthy forests are fast springing up in every direction.

Mount Alexander, and the granite ranges adjoining, are entirely denuded, and present a very large area ready for planting. On the slopes of this mountain many species of timber trees would thrive admirably. From Mount Alexander to Sandhurst the indigenous timber is generally stunted and worthless, excepting for firewood, and the timber required for the mines at Sandhurst has mostly to bo carried by railway for some considerable distance. Proceeding northwards as far as Runnymede, the timber is fast dying and disappearing, and until reaching the Murray River the country is entirely destitute of timber. For more than 15 miles north of Echuca, up the Murray, the timber is chiefly stunted box and white gum, only fit for firewood. Beyond this, still further north, the Barmah state forest commences, and stretches along the bank of the Murray as far as Yollima, near the junction of the Edward and Murray Rivers.

This immense forest consists of upwards of 50,000 acres all redgum, and is heavily timbered with magnificent trees not surpassed by any other forest in Victoria. In many places the trees will average from 80 to 100 per acre, most of which are from 18in. to 3ft and 4ft in diameter, and from 50ft to 100ft in height. Trees of much larger dimensions are not uncommon throughout the whole of this forest. The timber is of the greatest value, being almost imperishable.

I have to report that the destruction of timber in this forest at the commencement of this year was very great owing to great numbers of persons cutting timber for piles and other purposes without having obtained any licence from the Crown for so doing, and on several occasions I instructed Crown Lands Bailiff Stephenson to enforce rigid supervision over all persons cutting timber in this state forest and I have the honour to report that he did his duty efficiently in regard to the conservation of this forest. During the year several sawmills have been erected in Barmah and Yellima Btate forests, for the purpose of cutting timber for railway sleepers. Seeing that the supply of redgum for the service of the state is very limited, except from Barmah forest, and as each of these mills cut from 10,000ft to 20,000 ft. of timber per week, the large supply now existing will soon become greatly reduced. It is a fact well known that much of this timber has been shipped to India and other places.

Next in importance to Barmah is the large state forest at Bullarook, where for several years past a number of saw-mills have been in operation, and which have furnished the principal supply to Ballarat and other goldfields. The enormous demand for mining timber in this district has caused immense destruction of tbe principal portions of the forest, especially amongst the young timber. This is chiefly done by prop-cutters and splitters, who, upon an average, destroy about five times as much as they use. Frequently saplings of 40ft or 50ft are cut down, and only 9ft. or 12ft taken for mining purposes, the remainder of the tree being left to decay on the ground, and furnish fuel for the next fire that occurs in the forest. Fires in these forests have generally been caused by the carelessness of splitters in lighting fires near their camping places. Very strict supervision is required to prevent carelessness of this kind, even although the state forest regulations prohibit the lighting of fires in the state forests.

I have also the honour to report that during the year I carefully inspected the Bullarook state forest and the large tract of forest extending from Daylesford on the north to Mount Wilson on the south, and during that inspection I met with many hundreds of acres of virgin forest, and where the axe of the settler is yet unknown. This timber consists principally of stringy bark and white gum forest, fit for mining purposes, and would furnish an immense supply if judiciously and economically conserved.

The continued wetness of the season, and bad state of the forest roads, had caused a stoppage at nearly all the saw-mills for some months during the winter; consequently very little timber had been cut in the forest for some time, Anderson Brothers, at Barkstead, being the only saw-mill owners who had not been compelled to close their mills.

Acting upon instructions received from the honourable the Commissioner of Lands, I inspected the land planted by Anderson Brothers at the Stony Rises, where 10 acres have been planted this season with non indigenous trees, consisting principally of oak, elm, pine, and other forest trees, all of which is done in the very best manner, the young trees growing rapidly, and looking remarkably healthy. The same firm have a private nursery at Dean, where they have many thousands of forest trees that they intend planting next season.

By instructions from the honourable the Chief Secretary in July last, I made an in- spection of the timber reserves at Hamilton, and reported thereon, and also planned and laid out a public garden for that town. I also received instructions to inspect the timber reserve at Mount Rouse, near Penshurst, which I did, and furnished report thereon.

During my inspection of this district I observed ,that over a very large tract of country nearly all the timbor is dead, more especially the forests of box and white gum, the only living timber being a few stunted specimens of lightwood and honeysuckle. Unless some measures are speedily adopted to replant this dismal tract, assuredly their loss will be severely felt at no distant date.

In concluding my report, I hope the wasteful destruction and premature decay of our forests will attract the attention of the Government to the necessity of adopting measures to prevent the continuance of this evil, and devising a scheme both of protection and production. In furtherance of this important object it is essential that reserves of existing forests, and of portions of land for plantations, should be constituted, while at the same time every encouragement should be given to tree-planting on private property.

I have the honour to be, Sir, your .most obedient servant,