Woolley Bear munches on a Greenhood

Doug Ralph has taken another terrific photo of a Woolly Bear, this time upon a Greenhood. The two holes you can see suggest feeding has begun. 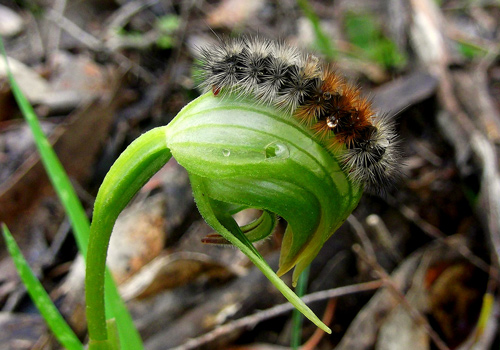 The caterpillars of the Arctiidae are mostly covered in dark hairs, which gives them the name “Woolly Bears”. The hairs can irritate some people. The caterpillars typically feed and move about during the daytime. Characteristically, if disturbed, they roll into a tight spiral with the head in the centre. They pupate in a cocoon made of silk with their hairs matted together. (Discovery Museum) 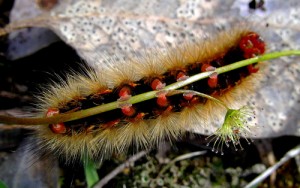 Upside down these caterpillars are even more colourful. Doug found the one pictured here clasping a Sundew in Little Bendigo last year.