FOBIF’s moss group met at the Castlemaine Botanical Gardens last Saturday to move the project further towards its target: to publish a field guide to mosses of the region in Autumn next year.

This is not an eccentric interest in a picturesque but unimportant corner of our environment. Mosses play a key role in repair of damaged land and protection of soil against erosion. DSE analyses for the Goldfields bioregion show the following interesting figures: in Heathy Dry Forest, 10% of understorey is bryophytes [ie, mosses and liverworts] and lichens, and 10% is ‘soil crust’. In Box Ironbark Forest, 10% of understorey is bryophytes and lichens, and 20% is ‘soil crust’.

That humble term ‘soil crust‘ covers a combination of life forms, including mosses and lichens: which means that your unobtrusive moss is covering a hell of a lot of ground in our region. 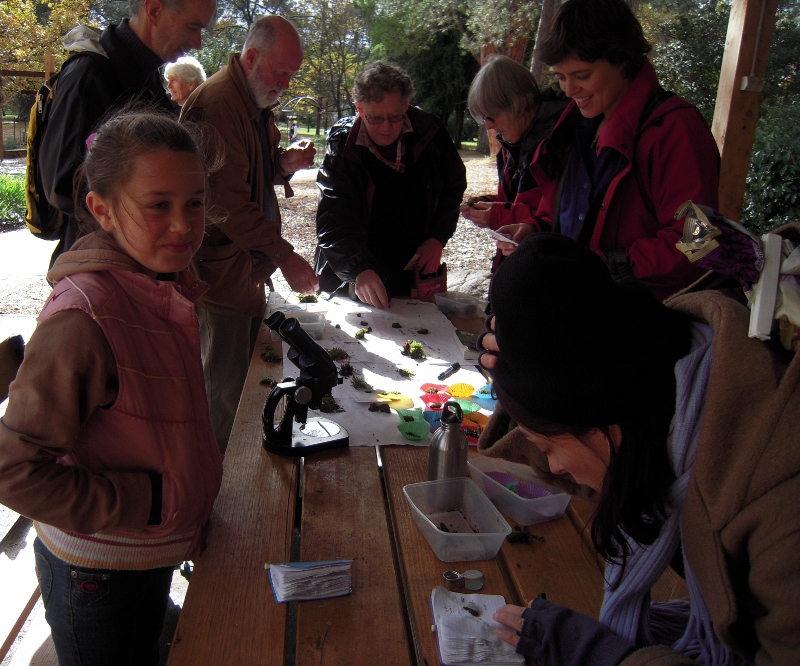 FOBIF moss group at work: moss is not just a green splodge...

The protective action of moss is easy to see. The following picture shows clearly how soil has been washed away from the area not covered by moss: 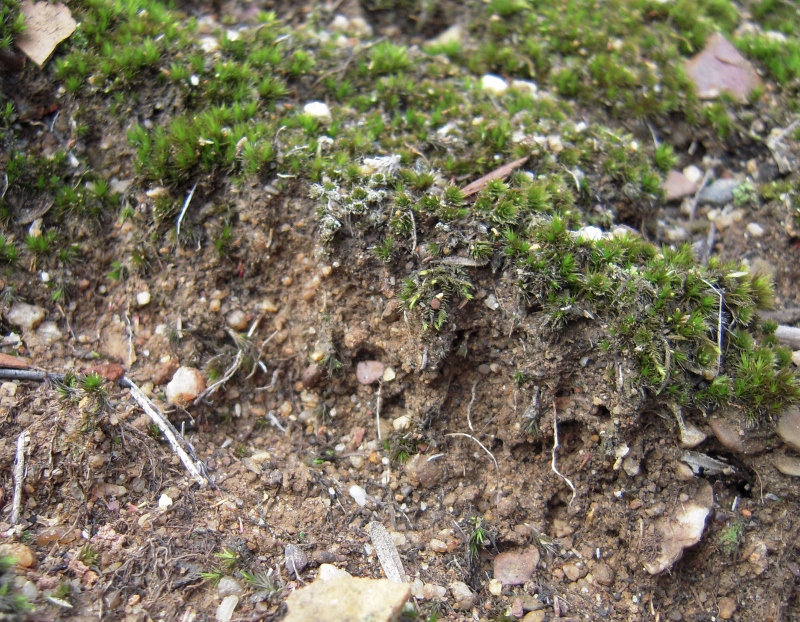 Road embankment, Castlemaine: soil has been washed away from the edge of the moss bed.

Moss and soil crusts are vulnerable to disturbance by trampling, or fire. Although mosses are not flammable, and therefore cannot be classed as fuel, they are often destroyed by ‘fuel reduction burns’. The following picture tells a story: 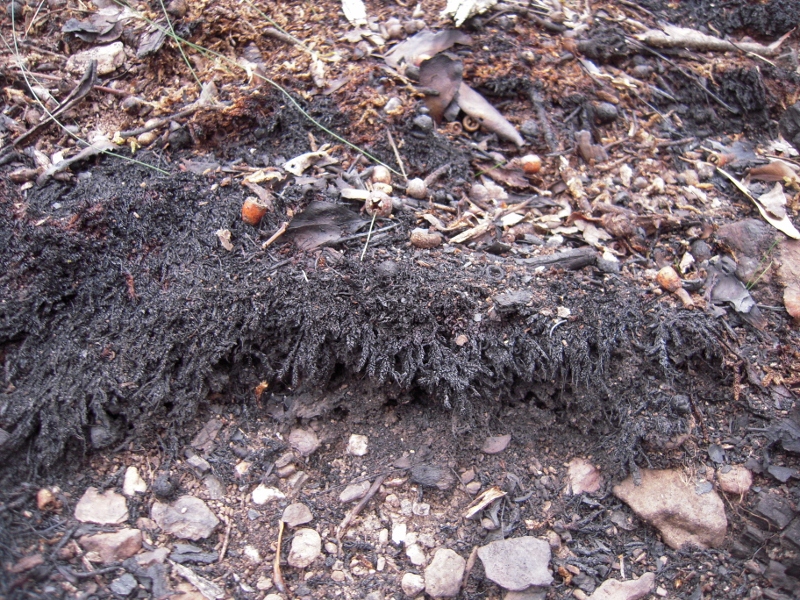 Burnt moss bed on the steep slopes of Tarilta Gorge, May 2012. Loss of soil is apparent at the lower edge of the bed.

In the recent Tarilta Gorge management burn, moss beds on the steep slopes were burned, and it’s clear that where they were destroyed, the soil beneath became vulnerable to washaway in heavy rain–which duly happened. Ironically, this management action happened at the time the North Central Catchment Management Authority was releasing its draft strategy, which points out on page 31:

‘The loss of topsoil is the greatest threat to the productive and environmental value of the dryland terrain of north central Victoria. The mass of soil lost in most years is well in excess of the mass of food produced. Soil is lost at a far greater rate than it is replenished…’ And DSE itself has a poster called Waterways and aquatic life can be at risk from bushfire. It reads, in part:

‘Fire can degrade stream water quality in many ways. The removal of above ground vegetation by fire exposes soil to wind and water, making the soil  more susceptible to erosion. This leads to soil, ash and nutrients flowing into streams, which may form a ‘sediment slug’ after sudden heavy rain.’ The text is accompanied by a photo of a stream choked by bushfire debris: it could have been taken after DSE’s own effort in the Tarilta valley.

And here’s another thought about mosses: the Southern Shepherd’s Purse [Ballantinia antipoda], a plant which survives only on Mount Alexander, is dependent for its survival on the moss beds of the Mount. You can see this rare plant at the Enviro Expo in the Market Building this coming Sunday, June 3.