About 70 people turned up to Sutton Grange on Tuesday night to hear Melbourne University’s Ari Hoffman deliver a stimulating talk about how landcare groups  might approach revegetation projects to cope with a rapidly changing climate. His talk was the third in the 2012 Connecting Country education program evening series.

Professor Hoffman’s absorbing talk was built on a number of propositions: the climate is changing rapidly—more rapidly than it ever has; the ability of plant communities to cope with change is directly related to genetic diversity; and that, therefore, we can enhance the ability of our vegetation communities to survive rapid change by increasing their genetic diversity. 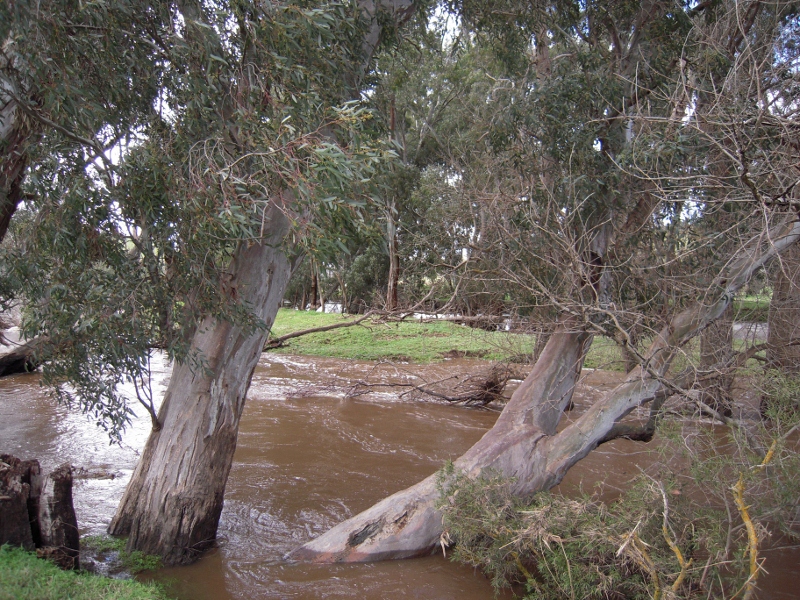 Loddon River near Guildford, September 2010: Professor Hoffman used the example of River Red Gum to suggest that restoration works should use a proportion of plants sourced some distance from the work site, in order to enhance genetic diversity.

Professor Hoffman acknowledged that his argument potentially ran counter to the accepted thinking of Landcare groups and other land restoration practitioners: these currently operate on the belief that revegetation projects should be done with plants sourced from seeds collected locally: that plants having ‘local provenance’ will be best suited to local conditions. Ari Hoffman agreed that this is generally the case, but argued that in times of change, and in situations where plant and animal communities had been fragmented by land clearing and development, isolated populations can lack the degree of genetic diversity which could increase their resilience in the face of change. He suggested that future revegetation projects should use a provenance system roughly divided as follows: about sixty per cent ‘local’; thirty per cent sourced from a ‘medium’ distance away; and ten per cent from a significant distance away. A variety of approaches could be used, depending, for example, on whether a species used wind or birds to disperse seeds.

Professor Hoffman acknowledged that there were risks in this procedure, but noted that some natural hybridisation was common, and that experimental evidence had shown that isolated populations were strengthened by the introduction of new genetic material.

Discussion of this idea was lively, probing and constructive, and the audience stayed for a long time after the talk—encouraged by the presentation of outstanding supper desserts by Growing Abundance.