Following our efforts to persuade authorities to concentrate fuel reduction efforts on areas close to settlement, and to integrate them with weed clearance [see our post Weeds are for burning, Feb 21], FOBIF has proposed a weed mapping project for the township side of Kalimna Park in Castlemaine. The proposal runs as follows:

The natural biodiversity assets of Kalimna Park are under constant threat from human actions: 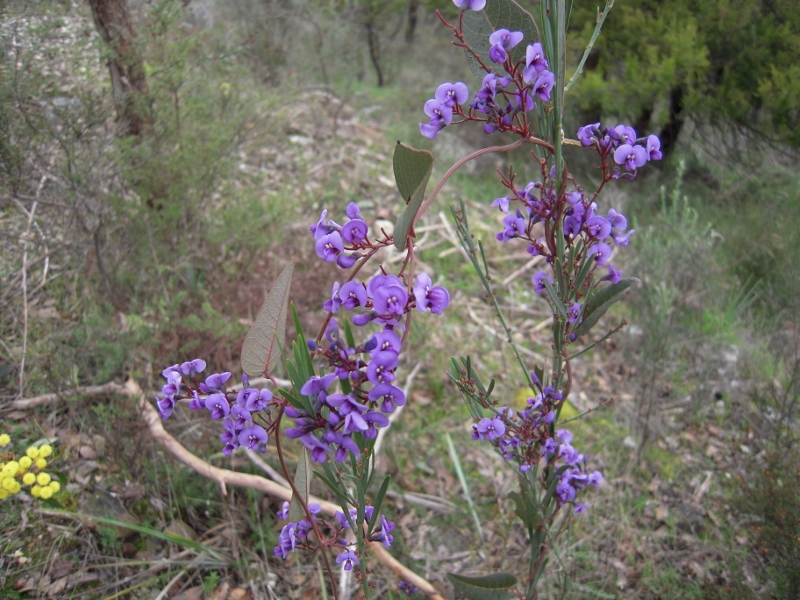 Hardenbergia in Kalimna Park: the Park's proximity to Castlemaine makes it a rich asset, but also presents management challenges.

In addition, because of the Park’s proximity to housing, there is pressure on park managers to apply fuel reduction procedures which may damage the extremely high biodiversity values which persist in this part of the Park.

Aim of the Weed Mapping Project:

To support improved management of the park, a weed mapping project has been designed to identify the areas containing these weeds to assist the volunteer friends and the land manager (Parks Victoria) in their control.

Methods of control could include:

To employ a contractor to identify and map the weeds on the western, or township side, of Kalimna Park and to provide this map for volunteer groups and PV to use in future planning. This mini project will be managed by FOBIF in consultation with the Friends of Kalimna Park.

FOBIF notes the recent launch of the CFA’s Landscaping for bushfires document, and the emphasis in it on choice of non flammable plants for gardens in bushfire areas. We believe that a relatively small amount of research by local volunteers could identify which plants indigenous to Kalimna Park are relatively non flammable, and that a long term program of encouraging such plants on the township side of the Park could be undertaken. Such a program could run in tandem with work done in connection with the Forest Creek Action plan, and could be integrated into Parks Victoria’s weed strategy, when this becomes available.

FOBIF is currently looking for funding to proceed with this proposal.

This entry was posted in Fire Management, News, Weeds. Bookmark the permalink.