On Sunday November 20 a group of 26 people were conducted on a tour of mysterious rock patterns in the vicinity of Mount Alexander. The tour was organised by some local landowners.

The patterns are in the form of a long line ascending a hill slope, and culminate in a carefully constructed semi circular shape resembling that of a serpent. They are based on the natural rock formations of the mountain, filled out with rock additions. They were ‘discovered’ in the early 1990s, but older residents of the area have noted that they have ‘always’ been there. 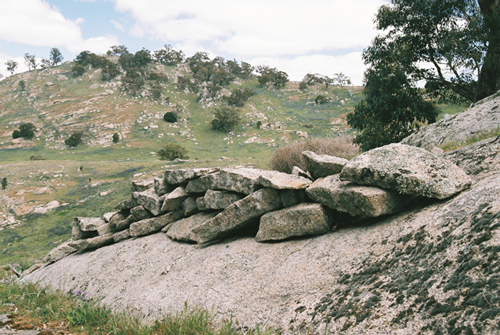 Section of the rock patterns.

Nothing is known of the origins or construction of the patterns, and they are not part of the remembered traditions of the Jaara people, but it has been speculated that they were put there by Aboriginal people as part of the cult of Mindi, a powerful mythological serpent. This is certainly a plausible working theory, given that the area was known by early white settlers to have been used by indigenous people for ceremonial purposes, and that there are rock formations in other parts of Victoria which present similar problems of interpretation.

The stones are presently the subject of study by teams from Latrobe University, and further clarification is hoped for as these studies proceed.

This excursion through wonderful country underlined the complexity of the cultural as well as the environmental history of the area. One of the locals pointed out in the course of the excursion that every time he had visited the area he left with more questions about it, and participants in the excursion would all have experienced the same sense of exhilaration and bafflement.

1 Response to Exploring a mystery