Favourite wildflower place to be burnt

The following article was contributed by Frances Cincotta.

I nearly skittled a Stump-tailed Lizard (Tiliqua rugosa, also known as Shingleback) that was basking on Demo Track this sunny afternoon. Luckily my car pulled up in time and the ancient-looking creature inched away into the wildflowers. I hope it and its family and friends are able to move quickly enough to avoid being killed or injured in the 576 hectare (that’s approx. 3km x 2km) ”fuel reduction burn” due to happen tomorrow, weather permitting. 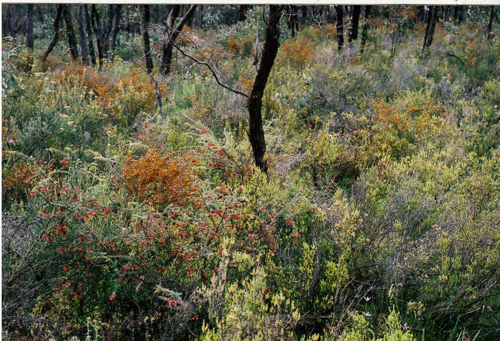 I also wonder what this bit of bushland, this precious, living ecosystem, did to us to deserve the punishment of having humans deliberately set fire to it? What did the Sun-orchids do wrong? What did these Pink Bells do to offend us? What grudge have we got against the Downy Grevillea? These species mentioned and their many plant associates that are less than 2m tall and “in the firing line” may not be killed outright tomorrow, but if burnt they will not get to set seed this Summer, and they certainly do not need fire to regenerate. Why should the Twining Fringe-lilies and other amazing flora of Demo Track cop the blame for Black Saturday bushfires in other parts of the state? What did the rare Hooded Robin do to harm us?

Will we humans of Newstead, Green Gully and Castlemaine all feel safer from bushfires after pre-emptively burning this beloved piece of bushland? Will it be worth it?