At the FOBIF AGM a question was put to the Catchment Management Authority’s Damian Wells about vegetation clearance along Barkers and Campbells Creeks. We’ve had the following response from the CMA this week:

‘The CMA inspected sites in the region in response to community/stakeholder enquires following flood events.

‘Any sites that contained accumulated flood debris i.e. loose vegetative material such as sticks, logs, branches, leaf material were targeted for removal. At almost all blockage sites the accumulated flood debris was positioned against in stream ‘live vegetation’, therefore it actually was contributing to the blockage. Predominately, this in stream ‘live vegetation’ consisted of exotic vegetation, mainly willow but may have included hawthorn, ash and poplar species. 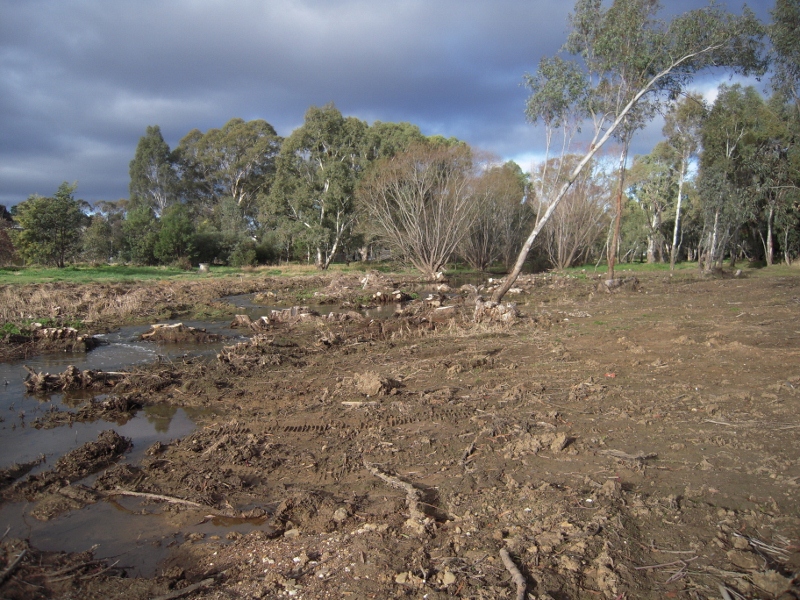 Campbell's Creek, July 2011: the stumps visible here are willows; the CMA says its works have had a 'negligible' effect on native vegetation.

‘At some sites live native vegetation (canopy) species such as red gum and wattle were amongst the accumulated flood debris sites. Therefore the act of accessing and removing the debris and live exotic species at the identified blockage sites with large mechanical machinery was unavoidable.

‘At one or two locations the CMA responded to blockages that consisted of single large native tree species e.g red gum. Where this was deemed to be contributing to a blockage problem it was either removed in full, part removed (I.e branches lopped) realigned in stream or repositioned on a nearby bank.

‘Largely there has been negligible impact on native vegetation values within this works area.

‘Prior to undertaking works, each site was assessed to minimise the impact on cultural and environmental values. This included impacts in accessing sites and during the blockage removal period. At Campbell’s Creek below the railway bridge CMA officers individually marked the blockages including live exotic vegetation (predominately willow) that could be removed.’