The plague of rubbish dumping which can be seen all over our bushland has reached the Castlemaine town boundary with the dumping of a pile of junk in Kalimna Park, only a hundred metres from Kalimna Point [and a few metres from the rather sad Bicentennial plaque]. 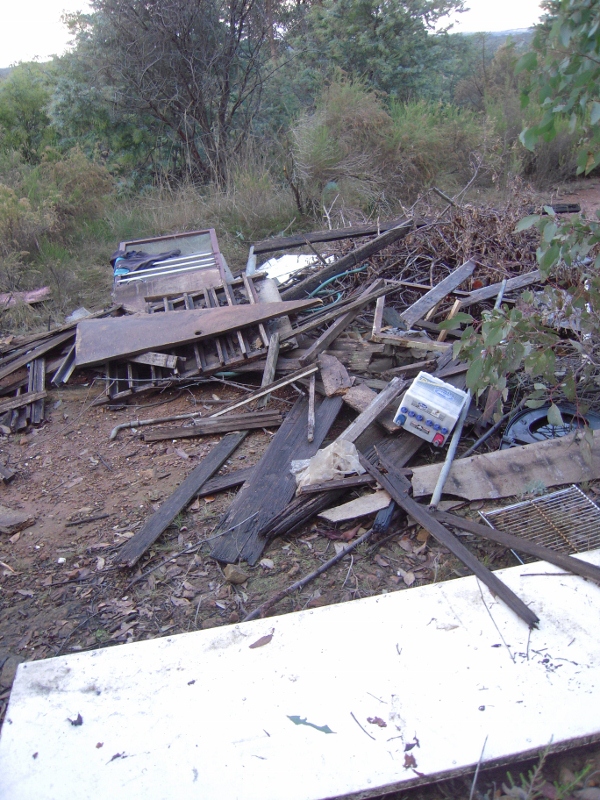 Rubbish near Kalimna Point: time needed to remove such junk is another imposition on Parks Victoria's limited resources.

It’s hard to fathom the mentality of people who apparently don’t notice that they are desecrating valued public space, but one of the factors presumably is the perceived expense of taking rubbish to the tip.

FOBIF raised this question with Council Environment Officer Amy McDonald a couple of weeks ago, and her response was simple: Council can’t afford to give out free tip vouchers because of budgetary problems.

Here’s an interesting question: who is responsible for the removal of ‘hard’ rubbish from our lives?

Council can’t afford it. There appears to be a significant number of citizens who don’t want to take the responsibility of getting rid of it responsibly. So inevitably, Parks Victoria is left with the job of removing it from the bush–which inevitably cuts down the time Parks staff can put into more productive things. In the end, the taxpayer foots the bill, one way or the other.

It’s clear that public education has to have a large role if this unpleasant and unhealthy behaviour is to be reduced. It will be interesting to see if the Council’s Environment Strategy deals with such a mundane but important matter [see above].