Floods and vegetation: a voice from the 1930s

In the light of the odd angry shot fired earlier this year at conservation works along our creeks, it is interesting to read a letter in the June issue of the Castlemaine Historical Society Newsletter. The letter, dated 25/9/1934, was retrieved from the Forests Commission files, and was written by noted Castlemaine artist A. M. E. Bale. Several of Bale’s works hang now in the Castlemaine gallery.  She had a house in Gingell [now Gaulton] Street, backing onto Barker’s Creek. We reprint the letter courtesy of the Historical Society. It illustrates the fact that creek management controversy didn’t start yesterday:

‘I have to complain of the over much zeal of the employees of the Commission at Castlemaine. They are carefully removing every scrap of bramble and gorse along Barker’s Creek, regardless of the fact that where there is nothing but “noxious weeds” to bind the banks of the creek together, then it would be best to leave a little of them to carry out that necessary function. So much gorse has been taken from the creek banks just behind my property in Gingell Street and the earth so loosened in consequence that in the last year or two the creek has washed away yards of the bank and the few trees that are scattered along it have in some instances fallen into the creek. Where there was a fence and a footpath (on the creek side of it) beyond the fence of my paddock, the path has gone and the outer fence had to be moved back. Last flood the water was half across my paddock for the first time since I have had it. Next time, as no binding roots whatever are being left, the water will probably take a yard or two more and then be nibbling at my land. It would be much better that your employees should use some judgment and leave some gorse on the creek banks to bind them-in places where native growths have been already destroyed. 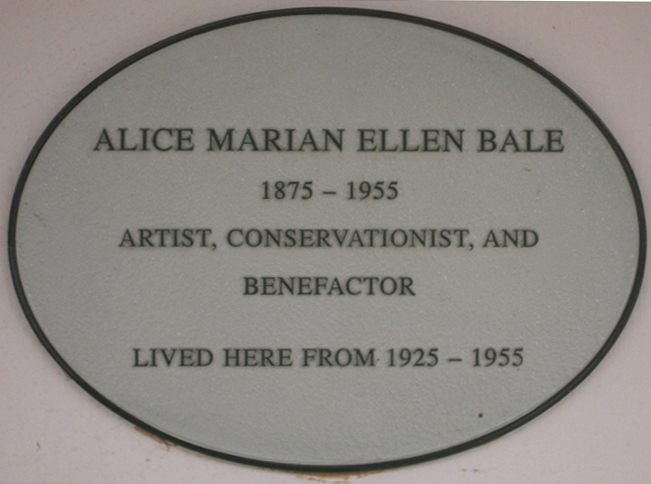 Plaque on AME Bale's house in Gaulton Street: her concern was that erosion followed over enthusiastic vegetation clearance.

‘The Town Clerk seems pleased that what the Council have done in the matter of taking out the willows and gums higher up lets the water “get away quickly”. My opinion is the faster it gets away, the more violent it is and the more of the banks it takes with it. I would plant the banks behind my place with tee tree etc., but the cattle would leave none of it. In such a case the only binding force to rely on is one distasteful to cattle-such as gorse and I do not see what harm gorse does in such a position.

‘Another thing: I am told that the row of trees on the creek bank by Sheriff’s Bridge (the earliest street planted trees in Castlemaine, and of great historic interest) is in your jurisdiction and not the Council’s. A local person is craftily murdering them – little by little – with a view to firewood. I have written to the “Castlemaine Mail” about these before, and also invoked the aid of influential people in the town, with temporary success. But after a time the trouble recurs. Two or three have been stolen. Last week-end I found one of the pines (the row is partly gums, partly pines) has just died in consequence of being ringed, and the next tree, a fine old gum, has been chopped part of the way round. I would be very grateful if you would exert your authority in the matter. Castlemaine is a beautiful old town and historic trees and general amenities should be preserved.’

FOBIF members are reminded that guest speaker at the July 11 AGM will be Damian Wells, CEO of the North Central Catchment Management Authority: he will speak on the problems of managing our waterways in flood time.