We have received a reply from DSE District Manager Steve Nicholson to our concerns about the conduct of the autumn Smutta’s Track burning operation [see below Smutta’s Track management burn]. It reads in part:

‘Following the ignition, and through subsequent patrols, crews are expected to extinguish any trees on the edges of burns and particularly any habitat trees they may have ignited. Given that this tree was raked around and largely protected from ignition via ground fuels, a reasonable explanation, which is supported by ground inspection, suggests that a fire brand, falling limb or otherwise may have ignited the tree….If this did occur, it is reasonable to expect that patrols would have, in most cases, identified the issue and ensured the tree was extinguished.

‘It is regrettable that this particular tree, having significant natural values as a habitat tree, suffered damage…It is essential that we now take this opportunity to reinforce the importance of good preparation, targeted and appropriate ignition and effective patrols to limit the possibility of this reoccurring.’ 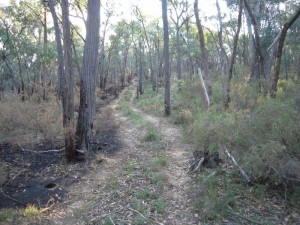 Less damaging, and just as effective 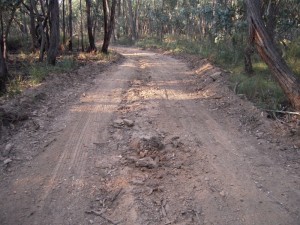 On the subject of the crudely made control line, Steve Nicholson noted that ‘it is district practice to keep to a minimum the amount of control line constructed…in some cases we may need a control line that can accommodate access for larger fire vehicles to ensure we can undertake burns safely.’ He assured us that the track in question would be rehabilitated ‘as soon as practicable’.

We accept this explanation in good faith, but it seems to us that it illustrates more than anything else the fact that DSE is under political pressure to burn as much ground as possible without the necessary resources or training to do the job properly.

In addition, we believe that the question of control lines is still a dodgy one. The photo on the left below shows the control line we complained about, in the State Forest. It is already showing signs of erosion. The one on the right is a control line only a few metres away, in the National Park: it provided a sensible and effective barrier without lasting damage to the bush. In the conditions which obtained in autumn, both tracks should have been like this. In the coming months, we’ll be going down to the area to see how the rehabilitation works are going.