Smutta’s track, near Irishtown in the Castlemaine Diggings NHP, was burned by DSE in Autumn as part of the Bendigo Fire Protection Plan. The bush at the time was quite damp, so much so that we wondered at the point of the burning exercise. DSE are under severe political pressure, however, to ‘treat’ a target area of bushland with  burning, and it was no surprise that the operation went ahead.

As expected, the effect was very patchy. It’s hard to see its value as a fuel reduction exercise, though it may have some interesting ecological effects, given the excellent conditions for regrowth in the area.

We were extremely disappointed by two aspects of this operation, however.

First: we had advised DSE that there are some big old trees in this zone which should be protected from fire. Although there was some raking around larger trees, we were surprised and disappointed by the probable destruction of a veteran red box right on Hunter’s Track, on the Salter’s Creek side. We measured this tree at about 125 cm diameter at breast height. and as far as we can tell it was  a candidate for the title of biggest tree in the zone [see pic]. 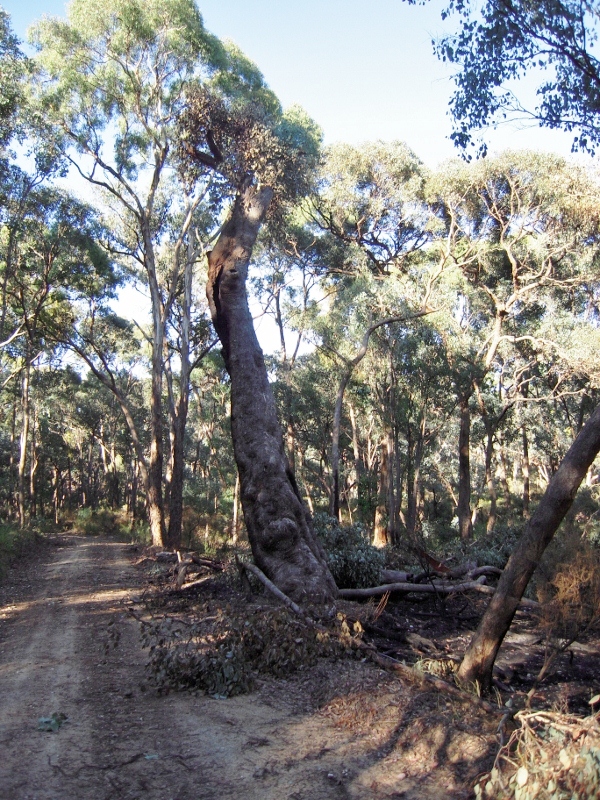 Its survival is doubtful.

Since this tree wasn’t buried in some obscure gully, but was right on the track, we do wonder about DSE’s raking and supervision methods, and those of Parks Victoria rangers who presumably had some role in advising on the ecological side of the operation. It may seem to be fussy to be concerned about a single tree, but it seems to us in this case comparable to security services at the Tower of London somehow forgetting to pay attention to the crown jewels.

It’s worth pointing out that in recent years DSE burns at Wewak Tk, Helge Tk and Mount Alexander have all killed or damaged large old trees—surely not the aim of these exercises?

Second, we are concerned about a bare earth track cut into the Fryers Forest on the east side of Hunter’s track, presumably as a containment line. This is a severe erosion risk, given its steepness and the looseness of the soil on the track, and the fact that a trail bike track crosses it [you can be sure the riders will try this one out at the first opportunity].

Given the mildness of the conditions, and the dampness of the bush, we can’t believe that this sort of extreme measure was necessary. We would hope that this track will be closed off as soon as is practicable, and that logs will be dragged across it, both to control erosion and  to reduce the temptation of trail riders to give it a go.

We have written to DSE to express these concerns. The acting fire manager has promised to follow them up.